xurkitree is one of the 11 ultra beasts, and one of my personal favorites along with buzzwole, guzzlord, and blacephalon. it is a pure electric type.

xurkitree sustains itself by consuming electricity. it absorbs electricity from the earth by essentially plugging itself into the ground and standing like a tree, which is where it gets its name. its body is highly efficient at conducting electricity. xurkitree can discharge up to 1,000,000 volts at once. for added context, 120 volts has been known to kill humans and people have died from as little as 42 volts. for even more context, the xurkitrees seen in the games aren't even full grown; you can actually see much larger ones in the background of ultra plant, xurkitree's ultra space. 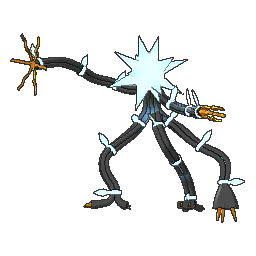 xurkitree has the highest base special attack out of all electric type pokemon.
the shiny form of xurkitree is blue, which could reference the fact that blue wires are not as commonly used as black wires. i remember there being a post that explained this in a little more detail but i can't find it rn. if i find it i will add it
xurkitree's fingers, claws on its feet, and prongs on its tail are all made from copper.